Help Save Blanchard Mountain from clear-cutting

At the southeast end of Chuckanut Drive, Blanchard State Forest is a widely popular recreation area visited by many thousands of people from across the Puget Sound and beyond every year. The area is managed by the Washington State Department of Natural Resources (DNR) and encompasses Blanchard Mountain and the Oyster Dome, the Forest features great hiking, horseback riding and mountain biking trails, as well as Lizard and Lily Lakes. I used to live at the foot of the mountain and spent a lot of time hiking those trials and enjoying the expansive vistas fronm the top of the Oyster Dome.

Blanchard’s visitors also enjoy viewing wildlife and watching hang gliders and parasailers that use a launch spot on the mountain. At the southeast part of the Chuckanut Mountains, Blanchard Forest is also important for it’s habitat connectivity as the only place in Washington State where the Cascade Mountains meet the Salish Sea.

Blanchard State Forest is in trouble and the threat is that hundreds of acres may be taken out of it’s present protected status and may soon be clearcut, without additional funding from the state in this year. The forest is state trust land which means that DNR manages it to generate revenue to support Skagit County, Medic One, the Port of Skagit, and United General Hospital as well as the Burlington-Edison
School District.

The area had been logged for years before the public became aware of this treasure and in the early 2000’s plans to log the entire Blanchard State Forest were met with great concern. A diverse group of stakeholders, from, horse back riders and hikers to Conservation Northwest, got together with the state to determine the future of the Forest. In 2006, the Blanchard Forest Strategy agreement, was put in place with support from the DNR and Commissioner of Public Lands.

The collaborative agreement identified a 1,600-acre core zone that would no longer be logged for state trust lands beneficiaries, but instead would be conserved for recreation and environmental qualities. But as part of the Strategy DNR needed funding to purchase replacement lands for the core zone.

The Washington State Legislature has appropriated $6.5 million toward Blanchard State Forest but another $7.7 million in funding is still needed and the deadline for funding the agreement is close to expiring.

If you have enjoyed the recreation opportunities that Blanchard Mountain has provided please contact state legislators today and urge them to fund the conservation of Blanchard State Forest in the 2016 Supplemental Budget to the tune of $7.7 million required!

Commissioner of Public Lands Peter Goldmark has requested the funding to save Blanchard Mountain’s Forest, Governor Jay Inslee and state legislators have not yet approved this funding into the state budget. Without this money the DNR will not be able to purchase replacement lands and will be forced to log the Blanchard Forest’s beautiful core area.

Conservation Northwest has been at the forefront of the effort to save the Blanchard State Forest for well over ten years. If you have a large chunk of cash you’d like to use to save this forest contact them.

Please help save Blanchard Mountain’s core forest from clear-cutting by taking action today! Learn more in this fact sheet from the Washington Department of Natural Resources.

Being disabled I don’t hike any more, but my friend and associate Rob LeRoy does and this is a post he wrote. I must agree Blanchard Mountain was always one of my favorite hikes when I was still hiking.

I’m a big fan of hiking. I don’t do it nearly as often as I would like to, but such is life.  My personal favorite hiking area is Blanchard Hill. It’s got it all: Views, lakes, forested sections and open areas. More variety than any other hike I’ve found.  Located on Chuckanut Mountain, (south of Bellingham between I-5 and Chuckanut Drive) Blanchard Hill is one of the area’s most beautiful natural landscapes and offers some of the best hikes and views around.  With several trails, Blanchard Hill offers hikes ranging from relaxing and quiet to slightly grueling. 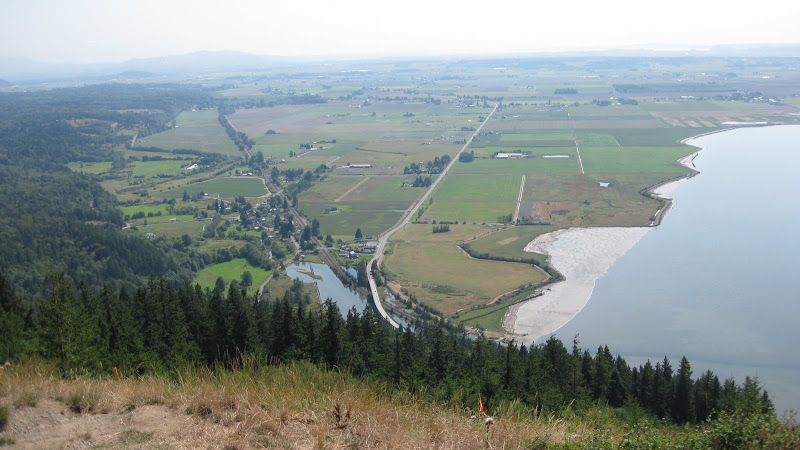 There are multiple trails and access points, depending on the level of distance and difficulty you are looking for. It is possible to hike from the bottom, via Chuckanut Drive, or drive to a lookout about halfway up, then continue to the peak from there. There are a couple of small lakes (Lily and Lizard) along the way, depending on which trails you take.

From the parking area, the trail (part of the famous Pacific Northwest Trail) winds up toward a series of bat caves, and then up to the top, known as Oyster Dome. The views from Oyster Dome are unparalleled. Be warned, it’s a tough hike, but worth every sweaty step. The reviews I’d read before my first attempt sounded daunting, but it wasn’t too bad. My 11 year-old daughter made it up just fine… She also had no problem sitting right up near the edge at the top. I, however, clung to a nearby tree and occasionally peaked over the side. What can I say, I’m afraid of heights and I love to hike. I’m also afraid of water but love being on boats. To each their own, as they say…

For more information on Chuckanut mountain and Blanchard hill, click here to see a map of the area.  To get to the Samish overlook parking area ,take I-5 to the Alger Exit #240,  head west on Lake Samish Road. Take the first Left onto Barrel Springs Road and follow it for 3/4 of a mile until you see a large gravel road  and a sign that says “Blanchard Hill trail system” Follow that road up the hill. It takes about 20 minutes, or so. You’ll pass some parking lots that access trails. Keep heading up. For your first time, your best bet is to go with someone who’s been there before. It’s pretty confusing- one of those places I know how to get to, but have difficulty describing. It’s definitely worth it, though!

This post originally published by Rob LeRoy at realestate.bellingham.net